Big Finish has been creating wild, thrilling Doctor Who audio adventures since 1999. Along the way, we’ve met several new Companions (a few of whom were name-dropped into official Who canon in The Night of the Doctor). Of these, perhaps the most creatively successful is Evelyn Smythe.

Created by Jacqueline Rayner and voiced by Maggie Stables, Evelyn is the type of Companion not seen on TV Who to that point. She’s 55 when we meet her, can’t run well, acts independently, and constantly calls the Doctor out on his bad manners. And when “her” Doctor happens to be the Sixth Doctor (Colin Baker) in the early post-Peri years, she calls him out a LOT. She’s an excellent character who is partly responsible for the growth of the Sixth Doctor’s mellower, more reflective persona in later Big Finish releases.

In all, there are about two dozen Big Finish adventures with Evelyn. Unfortunately, Maggie Stables died late last month after a long illness. So, as a salute to both Maggie and Evelyn, here’s a sampling of her time aboard the TARDIS:

“What would you say if I were to tell you that I once destroyed an entire race, that I have led friends to their deaths and caused numerous wars. That my intervention has led to peaceful people taking up arms and good people having their faith or reason destroyed.”

Evelyn’s first adventure with the Sixth Doctor is that rarest of treats: a historical! No aliens or monsters – just human beings in 16th century England. The Doctor traces a temporal fault to Professor Evelyn Smythe in the year 2000 and he tells her that her family history is being wiped out. The solution? Go to the source of the problem in the time of the Tudors! But when she’s pulled into a conspiracy to assassinate Queen Mary, will the Doctor’s solution cause more harm than good?

Pros: Worth repeating: a historical! Evelyn’s confidence and sass, right from the get-go. Her understandable belief at one point that the Doctor is her great-great-etc.-grandfather! The Doctor’s dark admission of the many mistakes he’s made. Good times.

Cons: None really, unless you’re against historicals, in which case you’re a fiend. 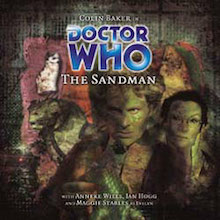 “There’s a worrying possibility they’ll be less afraid of me now. It’s incredibly difficult to maintain one’s reputation of a fearsome monster when you’ve been seen running away!”

In the Clutch, a massive space fleet in constant motion, the Galyari are being stalked in the shadows by a boogeyman from their distant past, a bloodthirsty monster known as the Sandman. It is death to look upon him. He is also called… the Doctor. This tale is a weird one! The Sixth Doctor is positively creepy at times, and Evelyn is understandably confused and repulsed as she hears of the Sandman’s legacy.

Pros: Colin Baker clearly relishes the opportunity to go into Full Villainy Mode in the Sandman flashbacks. It’s a side of the Doctor rarely seen up to then. It precedes similar tactics used by the Tenth and even Twelfth Doctors. The nature of the true killer is rather clever.

Cons: Big Finish overdid it on the Galyari voices. At the start of the story, the lizard-like aliens’ voices are so distorted and grating that you may be tempted to tune out. The Doctor’s method of defeating the killer is a few feathers short of coherent.

“Mutiny this is! Again! Mutiny squared!”

A bona fide Big Finish classic. Thrill to the exploits of the Gallifreyan swashbuckler, the Doctor, as he faces off that dread pirate, Red Jasper. Will Evelyn the Pirate Queen find the buried treasure or will she first order the foppish English captain to walk the plank? Yes, this is a comedy, through and through, set within a somber and surprising frame. Colin Baker, blessed with a wonderful script, is simply magnificent, going for Gilbert & Sullivan levels of bombast and comedy. Evelyn again is the moral center of the tale, and it’s her morality and empathy that lead to emotional payoffs in both the past and present.

Pros: The continuity-packed and hilarious “I am the very model of a Gallifreyan buccaneer…” The never-better chemistry between the Doctor and Evelyn. Red Jasper’s varying opinion of the Doctor’s wardrobe and manner, depending on whether Evelyn or the Doctor is telling the story (I laughed quite a bit). Nick Pegg as the cowardly Captain Swan. The out-of-the-blue emotional wallop in the final minutes.

Cons: Probably not for everyone. It IS a comedy. But if you’d let that stop you from listening to this, ye should be keelhauled, you scurvy dog!

“How can you be so matter of fact about it?” “His death is his destiny.”

Evelyn, already grappling with the pain of seeing good people die, now faces the body-snatching deeds of Burke and Hare in 1827 Edinburgh, where the death of innocents is not only certain, but a fixed part of history! A bold and dark story – featuring murder and prostitution right off the bat – Medicinal Purposes has a fantastic cast, including Leslie Phillips, David Tennant, Glenna Morrison, and an interesting discussion of the historical benefits of murder.

Pros: The Doctor’s stance that body snatching was “admirable, but not honorable” and Evelyn’s disgusted reaction to it. His explanation of proper name-dropping. Also, did you see what I wrote above? DAVID TENNANT IS IN THIS!

Any Big Finish audios you’d like to recommend? Do you have a favorite Big Finish Companion? Post your comments below!