Not only is this episode, “From Dancing Mice to Psychopaths,” the season finale, it’s the finale to the penultimate season! BBC America announced that Season 5 would be the series’ last, and I’m glad for that. Don’t get me wrong – I love this show! – but there are times during Season 4 where c0-Brain Mike and I wondered if this series was going to start meandering without any sort of endgame in sight. And lo & behold, we have it! We know now that it’ll have: a really NASTY villain; a mysterious puppetmaster who’s possibly immortal (!); and probably a major death or three. Because let me tell you, Season 4 ends on a dark note.

But before that – hey look! Ferdinand’s back! A little poorer (OK, a lot poorer) but not dispirited, he reawakens Rachel’s lust for power via some S&M and bondage. (Somehow, this motivational trend hasn’t yet made the cover of Fast Company.) Now that Evil Cho is out of the way – permanently (death by maggot-bot!) – Rachel drops any pretense of working with Sarah and the rest of Clone Club. She wants Neolution, and she’ll betray anyone to get it. Speaking of betrayal…

Over on the Island of Lost Clones, Mommie Dearest Susan locks up Cosima after their attempt to create new Leda/Castor stem cells succeeds tremendously. For Susan, the search for the cure is important – but not as important as seizing power by restarting the cloning project. Like Rachel, Susan sees an opportunity to pull Neolution back onto the path of cloning supremacy. Unfortunately for Susan, she doesn’t have Rachel’s ruthlessness and self-hatred – and boy, is THAT a wild combo of bad traits! Spitting like Joaquin Phoenix in Gladiator, Rachel (a clone herself, mind you) tells Neolution’s board that the testing of clones will not only resume – she intends to push the White Rat metaphor to its nastiest extreme, stripping the new clones of all rights and keeping them locked up. OHHHH, SHE’S CRAZY. 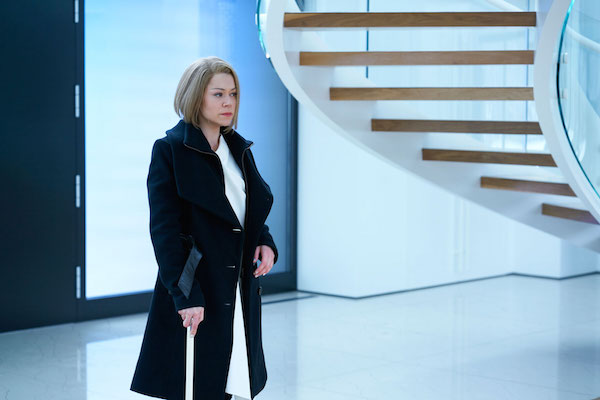 And yes, her bionic eye is still giving her David Lynch Vision – which leads to one of several references in this episode to Neolution’s founder, P.T. Westmoreland, who literally wrote the book (he did! He wrote a book!) on Neolution and genetic theory about 100 years ago. Susan had suggested that Westmoreland himself developed Rachel’s eye, but how could that be if the guy lived decades ago…?

In any event, Sarah and Mrs. S are in the dark about Rachel’s motives until a visit by clone beautician Krystal (and subsequent impersonation of Krystal by Sarah) gives them a chance to quiz new Brightborn big-wig Dr. Van Lier. They realize what Rachel and Susan are up to, and Sarah strong-arms Castor clone Ira into summoning a helicopter to take her to the Island of Lost Clones, where she intends to bring Cosima back, Die Hard style. Yeahhhhhh, about that….

Wednesday Charlotte gets an increasingly ill Cosima out of the locked room and says they have to get to the boat. First, though, they happen to see Rachel viciously stab Susan! Holy Matricide, Batman! Wednesday Charlotte is going to need therapy for that. They quickly leave the house, but a) they’re not sure where they’re going, b) it’s dark and really, really cold, and c) by leaving, they miss bumping into Sarah!

Sarah’s Bruce Willis impersonation lasts about as long as my brain cells during Live Free or Die Hard. She finds a badly injured but still alive Susan, and Rachel takes advantage of her distraction to beat the crap out of Sarah with her cane, stab her in the knee (!), and grab her gun. This would’ve been 30 seconds in a Die Hard film, but it’s understandably traumatic enough to send our hero Sarah scrambling for her life!

Sarah calls Mrs. S for help, but whoops, Ferdinand is already in the Rabbit Hole safe house, keeping an eye (and his gunsights) on both S and Kira. Rachel outmaneuvered Clone Club big time in this episode. The only tiny bright spot is the return of Delphine! Creepy Uncle Joe from Rachel’s visions shows up to save Cosima and Charlotte, and he brings them to — a homeless camp on the Island? With medical equipment? And ominous glances from other bearded people? Where is this, Mulholland Drive? Fortunately, Dr. Delphine brings Cosima back from the brink with her, um, bedside manner.

The season ends with Rachel, now firmly in power, about to have her first audience with … P.T. Westmoreland. Yes, he’s alive! Maybe. Could he be cloning himself over the decades and transferring his memories, ensuring his immortality? Or is a fakeout?

It’s great to see Rachel as a villain again. Let’s give the writers credit for slowly building her back up over the course of two years. She’s now very much aware what defeat and humiliation taste like, which makes her deadlier than ever.

I’ve mentioned several times that I’m sick of the Castor clones, but I’ll make an exception if we can get a spinoff featuring Ira, Rachel, and Ferdinand. “Is he wearing socks?”

The Hendrixes hiding out in the woods with Grizzly Helena: Alas, Alison “has the shits.”

Krystal refuses to believe that she has any resemblance to Sarah. Brilliant.

I love it when a clone impersonates another clone. It somehow makes Tatiana Maslany even more amazing.

NOOOOOO, not another “Man Behind the Curtain” trope! Geez McGee, I thought we were done with that after Lost. I don’t mind the concept of an immortal mastermind, but this episode gives us the intro and the payoff in the same hour. No setup. It’s a little too Deathly Hallows-ish.

Why in the world does Sarah go solo to the Island of Lost Clones, when she already knows it’s a hostile situation? It’s crazy. She could’ve left Kira with Felix. There’s no reason for her NOT to have taken Mrs. S with her, since this is the type of situation that S excels in. That’s just, well, dumb.

That’s it for this year’s recaps, but stay tuned! Mike and I will soon mingle brain cells and discuss our final thoughts on Orphan Black Season 4.