In a season that proved to be brilliant in so many ways, one of the highlights of Doctor Who this past year was the return of Missy – or, as the character’s usually been called through many, many appearances on the show, the Master. Fighting the Doctor (and saving him, when she’s not busy trying to kill him), fighting Daleks, simultaneously helping and tormenting Clara – Missy reminds the audience with mad style why she and her previous incarnations have always been the Doctor’s best frenemy. (Even if Davros might have something to say about that.)

But is Missy the best incarnation of the Master? Come find out! Here, we take a look at all of the regenerations of the evil Time Lord to grace the televised episodes of Doctor Who, ranking them from worst to best.

I always dress for the occasion!

Yes, the star of such classic films like Best of the Best, Part 2, Sorority Slaughterhouse, and High Heels, Low Standards once was cast as the Master. And yes, it was a trainwreck. The sad thing is, everything starts out okay – he’s originally Bruce, the EMT driver, who the Master’s ‘essence’ possesses, and that’s not too bad. But then, he becomes Terminator Master. 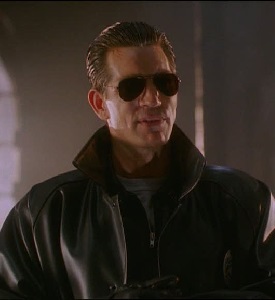 And then, Camp Megalomaniac Master, by way of the School of David Caruso Overacting. 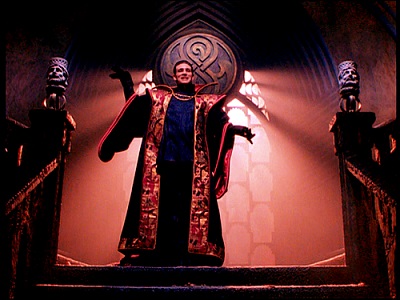 He’s not menacing. He’s not evil. He’s a joke. And given how good Paul McGann is as the Eighth Doctor in this wretched abomination of a story, it’s a shame. 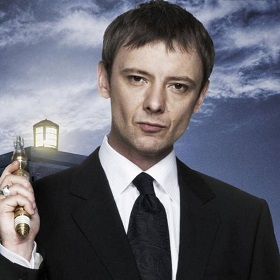 Anyway, why don’t we stop and have a nice little chat where I tell you all my plans and you can work out a way to stop me, I don’t think!

More of a shame is John Simm’s wasted run as the Master during David Tennant’s tenure as the Tenth Doctor. A brilliant actor – one need look no further than his brilliance on Life on Mars to see that – his performance as the Master starts out ridiculously well, right from the aftermath of his regeneration. The look of malevolent glee on his face as he wakes up, and realizes that he’s got the Doctor’s hand, and the TARDIS, and he’s won …

… it’s brilliant. And the gloating is well-deserved.

From there, though, it goes downhill. As he becomes Prime Minister Saxon (a storyline that honestly makes no sense), he goes from sinister to this weird, smug, frenetic “I’M EVIL!!!” mentality – it’s like he’s trying to out-manic the Tenth Doctor, and it doesn’t work. And that super-hyper “I’M EVIL!!!” portrayal carries right on over into his later appearances in “The End of Time.” I think if he’d gotten the chance to be cold and calculating – the yang to Tennant’s yin – he could’ve been great as the Master. As it is, he unfortunately just chewed a lot of scenery.

Peoples of the Universe, please attend carefully. The message that follows is vital to the future of you all. The choice for you all is simple; a continued existence under my guidance or total annihilation.

There’s a pattern here. Namely, first performances of a new Master that start out great, with things only getting worse from there. And for the most part, that’s true of Anthony Ainley’s turn as the Master. Taking on Consul Tremas’ body in “The Keeper of Traken,” his Master is absolutely superb in his next two stories – the Fourth Doctor’s swan song in “Logopolis,” and the Fifth Doctor’s debut in “Castrovalva.” He manages to combine the panache and the charisma of Delgado’s Master with the at-times unhinged insanity of Peter Pratt and Geoffrey Beavers … and it works. He’s more dangerous than his original incarnation.

After that, though? It’s a mess. When the Rani says in “Mark of the Rani” that “he’d get dizzy if he tried to walk in a straight line,” it’s a fairly accurate description of most of Ainley’s appearances as the Master. Lots of over-complicated, usually pointless evil plots that don’t make any sense, lots of metaphorical mustache twirling, gloating, and monologuing that would make Syndrome from The Incredibles proud. The dangerous Master we glimpsed in “Castrovalva” turns up all the dials to 11, and shoots straight into over-the-top bombast for the rest of his appearances with the Fifth and Sixth Doctors. He’s not menacing or dangerous, but just kind of an evil buffoon with delusions of grandeur … and it’s disappointing, to say the least.

Oddly enough, though, in Ainley’s last televised appearance as the Master in “Survival,” he dials back the Snidely Whiplash Overdrive Mode long enough to give what’s probably his best – and most chilling – performance. Infected by the Cheetah People, the Master’s no longer interested in crazy schemes and chewing scenery – he’s instead stripped down to something primal, and it’s fascinating to watch.

If he’d only been more like this throughout his time as the Master, I think Ainley would be remembered as one of the character’s best incarnations. Instead, we only have some glimpses and moments of a great villain – and, unfortunately, far more moments of a “meh” one.

Oh! Now I can say I was provoked!

For a Master who realistically only appears in two scenes of one episode, man, does Derek Jacobi own the role. He spends most of the episode “Utopia” in the chameleon arc-created persona of kindly, doddering Professor Yana, trying to help the remnants of humanity escape the clutches of the Futurekind. Upon switching off the chameleon arc, though, he reverts to his true form – the Master – and watching him so effortlessly switch from to “meek and mild” to “badass ruthless” in the blink of an eye is nothing short of amazing. For less than ten minutes, Jacobi’s Master takes control of the situation in “Utopia” and just utterly owns the Tenth Doctor.

It’s terrific to watch, and it’s a shame that this incarnation of the Master was so brief. (One can only hope that Big Finish somehow manages to work him in as the Doctor’s nemesis in their stories someday!)

Predictable as ever, Doctor.

When the Master disappeared at the end of “Frontier in Space,” most regular Who viewers must’ve believed that would be the last they’d see of the evil renegade Time Lord. (Roger Delgado’s tragic death at this time certainly would’ve made this an understandable notion.) So it must’ve come as some surprise several years later during Tom Baker’s tenure as the Fourth Doctor that the Master reappeared.

But the Master certainly didn’t look as he did before, appearing instead as a hideous, rotting husk of a person. And gone was the suave, confident charm of Roger Delgado’s Master, replaced instead by pure, vicious rage. “Only hate keeps me alive,” he tells the Doctor at one point … and the words are spit with such venom, it’s chilling to hear them spoken. It’s a far cry from what the Master had been during Delgado’s time in the part, but it works perfectly, and Peter Pratt’s voice alone makes the character incredible to watch – and to listen to.

This version of the Master appears again a few years later as a foil for the Fourth Doctor in “The Keeper of Traken,” with Geoffrey Beavers replacing Peter Pratt in this incarnation of the role. He doesn’t quite have the menace of Peter Pratt in “The Deadly Assassin,” but honestly, that’s mostly because his makeup in “The Keeper of Traken” is a pale shadow of what was seen in that earlier story. But he’s still creepy and menacing, and his insane desperation to survive – and make the Fourth Doctor suffer – is still brilliantly nasty. (His more recent appearances in the Big Finish audio productions have been equally wonderful and nasty as well.)

Even though many avid Who viewers assumed that “Missy” might be the Master from the moment she appeared at the end of the Twelfth Doctor’s first episode, “Deep Breath,” it’s unlikely that anyone could’ve predicted just how great she’d be. She manages to take the unhinged, unpredictable insanity often seen in Ainley’s and Simm’s Masters, but keeps it from turning into camp, as they seemed to do all too often. If anything, she flips the “bananas” trope on its head at times – you get the feeling that her homicidally wacky behavior is often an act, and she’s far more calculating and devious – and in control – than she’s letting on.

However, one subtle nuance that Missy’s brought back to the ongoing Doctor/Master relationship is the friendship – such as it is – that she has with the Doctor. This comes across loud and clear in “The Magician’s Apprentice/The Witch’s Familiar,” where it’s evident that they have a deep, rich past together, and however strange that history may be, they have great respect for one another. It’s a reminder of why the Doctor’s always seeking to redeem his mortal enemy, rather than defeat him, and why – while Missy/the Master always wants to eventually kill the Doctor – there’s a certain admiration that keeps her from, well, popping him like a balloon. Missy’s a terrific addition to the modern Who pantheon of villains, and I hope we keep seeing her in seasons to come.

I am the Master … and you will obey me.

Sometimes first appearances are indeed the best. So it should really be no surprise that the reason all of the other various Masters throughout the history of Doctor Who are held to such a high standard is because of how utterly brilliant the originator of the role actually was. Roger Delgado – cast to be the Moriarty to Jon Pertwee’s Third Doctor – is nothing short of outstanding in just about every appearance he made on Doctor Who. (And there were quite a lot of them – Delgado’s Master is in every single episode of Jon Pertwee’s second season as the Doctor, and frequently in the two seasons after that!)

Charming, suave, and brilliant, Delgado’s Master was much the equal of the Third Doctor in every way. His schemes were grand and his ambition boundless, and it’s always entertaining to watch his character execute those mad plans with style. He also got the upper hand against the Doctor many, many times, and while he never ultimately succeeded in his schemes, he certainly scored plenty of smaller victories against the Third Doctor and U.N.I.T. along the way. And some of his failures were the result of his own ego and arrogance, rather than the Doctor outwitting him.

One of the big differences between Delgado’s Master and all of his other successors was his pragmatism. He wasn’t always out to conquer the universe, or kill the Doctor (although he certainly wasn’t adverse to those goals!). Sometimes, his goals were smaller. And much like the Rani would be in later years, there were many times he really didn’t care about the Doctor at all – it would only be when the Doctor would show up and interfere with his own Machiavellian schemes that the Master would try to kill the Doctor.

But there were plenty of times that he cooperated with the Doctor (sometimes willingly, sometimes not), and even with U.N.I.T., if it served his own interests. His Master wasn’t so much insanely evil so much as simply lacking a conscience, and that’s perhaps a distinction that elevates his Master above all the others. He had an immense amount of respect for the Doctor, though he was loathe to admit it. And even Jo Grant, the Brigadier, and yes, even Captain Yates and Sergeant Benton – they all got a nod of admiration from the Master here and there.

Make no mistake, though. Of all the Masters, his was the most ruthless. And he most certainly wanted the Doctor dead.

Roger Delgado’s Master is a joy to watch. The most insanely evil? No. The most villainous? Possibly. The most fun? Probably.