And we’re here! The Season 5 premiere of Orphan Black – “The Few Who Dare” – kicks off the final path towards the series’ end. There’s so much to love about Clone Club and all the other characters in this show – where it’s struggled at times, though, has been to weave a fully coherent story out of all the brilliant ideas tossed around in each season. (There’s times that “Orphan Black” reminds me of “The X-Files” and “Lost”, trying in vain to retroactively figure out a Master Plan where one never existed in the beginning.) So at this point, we’re looking and hoping for satisfying resolutions for the characters, and as a bonus, if the show can stick the landing story-wise? So much the better. Let’s see how things unfold …

We start back on the Island of Lost Clones, with Sarah still bleeding out from her fight with Rachel. Fortunately, she’s got enough assorted junk in her pockets to make MacGuyver jealous, so a tampon gets turned into a tourniquet. She also has a little juice left on her phone, so she calls Felix and lets him know that Mrs. S and Kira are in danger. Apparently rustic, deserted islands have amazing cell phone service, but that’s neither here nor there. In between her MacGuyvering and running up minutes on her phone, she’s also menaced by a Legit Island of Doctor Moreau Mutant Creature (L.I.D.M.M.C.), which she manages to evade. So Sarah’s back to what she does best – being a survivor. 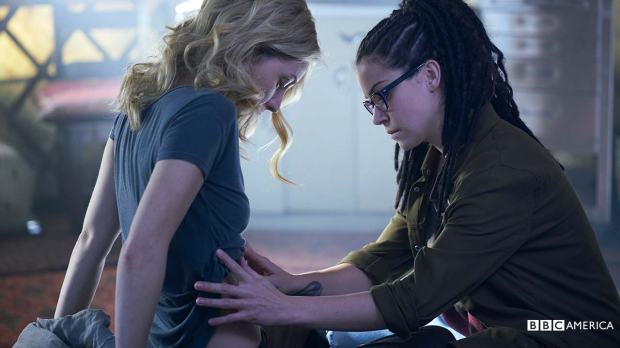 Over to Cosima, who’s recovering at the Neolution Hippie Commune. Delphine’s there for a hot minute before going MIA. Turns out that the price of giving Cosima her life-saving treatment seems to be Cosima’s research data, freshly stolen from her bag. A note from Delphine in the bag – “whatever happens, follow my lead” – isn’t exactly reassuring. A Neolution Hippie stops by to check on Cosima. Her name’s Mud, and she’s kind of like Willow from “Buffy” if she dropped serious amounts of acid every day. Still, she’s lucid enough to provide some cheerful exposition – the name of the Neolution Hippie Commune is Revival, P.T. Westmoreland is its founder, he’s 170 years old, and he lives in the creepy house up on the hill. Cosima takes this all in stride, and meets up with Wednesday Charlotte, who’s also there and understandably creeped out, too.

Over in the not-crazy part of the world, Alison and Donnie are in Helena’s yurt (located in woods that couldn’t possibly be the same woods as the Island of Lost Clones), looking miserable. Felix calls them, and tells them to hang tight. Alison doesn’t seem enamored of that plan. Donnie’s too happy making bird calls with Helena to care, and that sounds like way more dirty of a euphemism than it should. As they’re looking to leave, Alison gets captured by a Neolution commando, while Donnie runs. Alison finds herself whisked off to a windowless serial killer van in the woods, where she’s reunited with a reluctant Art and his psychopathic new partner Detective Maddy Crazypants, who’s the latest and greatest version of Neolution’s unending supply of snarky psychopaths working for the police. Detective Maddy and Art want to know where Helena is. Alison doesn’t know, which is surprisingly believable, because have you met Helena? Alison gets whisked away, presumably to similar trees on the Island of Lost Clones, but not before giving Art a hurt look of disappointment.

Speaking of the Island, Sarah finds a boat and possibly a way back home. She also finds disturbing signs of what the L.I.D.M.M.C. has been doing, like eating other creatures alive. Still, she circles her way over to Revival, wanting to rescue Cosima first. That’s where she finds that Cosima wants to stay. Cosima’s intrigued by the “crazy science” happening at Revival, and wants to know more. In particular, she’s heard several Revivalist talk about “the fountain”, and wants to know what that is. Sarah doesn’t quite get that logic, but respects it, and heads out on her own.

Back to Donnie, escaping from Neolution commandos, except he’s promptly accosted by another one, because he’s Donnie. And because she’s Helena, she pops out of nowhere right when Donnie bumbles into his capture and starts kicking ass. Donnie inexplicably decides to help, which means that while the commando gets taken out, Helena gets a sharp stick in her very-pregnant belly. Ow. Donnie decides to get Helena to a hospital, and dammit, Donnie, SAVE THOSE BABIES.

Cosima, meanwhile’s about to also stab herself in the belly with a new treatment injection – surreptitiously provided to her by Delphine, before she heads off and away from Revival – that needs to go into Cosima’s uterine wall. Again, ow. She can’t quite bring herself to do it. Fortunately, evil clone Rachel chooses this moment to stroll in, and goes into full Syndrome monologuing mode while offering to do the injection for Cosima. “You and I are going to cure us all,” Rachel preens. Cosima whatevers her and takes the injection.

And, being the ubitiquitous sort of villain, Rachel’s also present when Sarah finally makes her way back to the boathouse alone, and then promptly gets blasted by a tranquillizer dart. As she’s falling unconscious, Rachel looms over her, looking like the cat who caught a dozen canaries. “It’s a new day, Sarah,” Rachel says, not sounding too megalomaniacal or anything.

So … a good, serviceable episode that did just what it needed to do. Pretty much all of the loose ends from last season are wrapped up (or at least addressed), and the table is set for the rest of this final season. A promising start, indeed!

“Stick in belly”. Oh, shit, is that all? For a minute I was worried. Jesus, Helena is tough.

Alison, as always, is a riot.

“Helena was out murdering God’s creatures, and my husband abandoned me!” Good way to sum up Alison’s adventures in the woods that aren’t, um, the same as the woods on the Island of Lost Clones.

And: “Poop on a stoop. We don’t even know what the plan is!”

Mud – still can’t get over that name! – is a welcome addition to the show. “Tweedle Tall and Tweedle Small!”

God, Rachel’s Smug-O-Meter is dialed up to 11 already. It’s gonna be a great scene when Helena finally kicks her ass. (Still, she’s not nearly as insufferable as Evil Cho.)

Delphine provides what probably should be the show’s motto: “Follow the crazy science”.

Art’s saddling with Officer Crazypants. How many cops in this town work for Neolution as well? All BUT Art? Is it part of the standard law enforcement training program? Christ. It must be the worst-kept secret of all time. Also, yes, I know she implicitly threatened the safety of his daughter, but he rolled over awfully quick. It just seems like this was 2-3 episodes worth of story smushed into one, and the rushed aspect of it makes it weak.

Um, when my phone has 2% power and I’m on a deserted island? It tells me “No Signal” before promptly dying on me. That Magic Phone of Sarah’s gets better reception than Jack Bauer’s Blackberry on “24”. I know you’re trying to drive up the dramatic stakes, writers, but could you at least make Sarah’s call to Felix slightly believable?

The buildup for P.T. Westmoreland is either going to be great or a profound disappointment. We’ll see which it is. BUT JUST GET TO HIM ALREADY.

Donnie, it’s adorbs that you’re trying to help Helena fight the Neolution commando. But you do remember that she flat-out butchered the drug dealers who tried to kill you two seasons ago with a freakin’ paper cutter, right? Let Helena handle business, and maybe she won’t get stabbed in the belly with a pointed stick.